PURCHASE
In use at schools, court rooms, correctional institutions, major hotels, government buildings, factories, warehouses, and more. Can alert security, public safety, and control doors at the touch of a button! 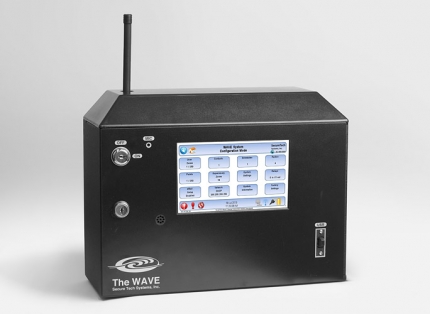 Invest in your organization's security with The WAVE Plus, an Instant Notification System to enhance safety in environments such as government facilities, hospitals and schools.

In an emergency, the quick arrival of law enforcement is critical.  In the event of an impending threat, a transmit device can be activated to trigger the rapid broadcast of an alarm signal, instantly transmisting a location-specific message over the 2-way radio system used by first responders.  It can also call 911 with a pre-recorded message.

The programmable communication unit comes ready to interface with 100 zones, with available options to expand the system to 10,000 zones.  With a wide selection of input devices, your system can be designed to provide an effective integration into existing security systems.  The WAVE Plus system is wireless, making installation and upgrades cost effective.

Included with the WAVE Plus In-Building Instant Alert System